Last week, I asked the following question:  “What is the difference between historical costuming v. historical clothing?”   You can read the entire first post here, but in summary, the question was inspired by a conversation that I had with a good friend of mine, and a fellow member of the Trayn’d Bandes.  While our conversation was deep and meaningful, I found myself still pondering the question, unable to really succinctly explain my opinion.  I found my answer and reasoning to be in a grey area.

This led me to reach out to several friends of mine, who make up different facets of the performing, living history, historical research/recreation, re-enactment and SCA community.  While all of them are part of a different component, all four of them have one solid thing in common; they sew and create clothing/costumes.  This made them the perfect target for the question: What is the difference?”

I found myself in assembling the answers and processing the information,  that the question I was asking, was a very broad one, and allowed for a blurry and grey area.   The word costume v. clothing, is incredibly interchangable, because for each person they can mean something incredibly different.

Daniel Rosen, who has been a good friend of many years, was my first target.   Daniel, who considers himself an interpreter, works for Plimoth Plantation, as well as Old England Grown New.  In our conversation, his words made it startlingly obvious to me, that the question I was asking was incredibly convoluted. 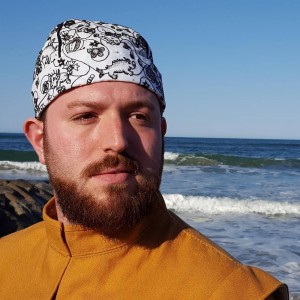 “I’m generally not reenacting or recreating something specific, rather I’m using evidence to make interpretations of what is probable to have existed then.  When I present to the public, I then interpret the stories of the experiences of historical people, to modern people…..I would say that I’m making the things that I do to the best of my knowledge and abilities to try and mimic the clothes of that time as closely as I can.  When I put them on I consider them a costume in the modern, American sense.  I am putting on funny clothes for a purpose.  So I would then say that a costume in your question, could be the outfit I put on that is unlike my normal dress….Approximating historical choices isn’t a destination, and every new application of evidence/research to clothes is a step towards period examples….Any and all of that (what others create) can be “clothing” because it can be worn successfully without disintegrating…but not all of them are things historical people would have known, had, done, or used, so they might not have been their clothing but will always be a “costume” to us. ” – Daniel Rosen

In reading this, and continuing to process the information and insight that Dan gave me, I recognized that the conversation found new focus.   With this new found insight, I continued this conversation with others.   I began speaking Mathew Gnagy, of M.Gnagy Design.   Mathew is a professional costumer, designer, and teacher at Parsons University of Fashion Design in New York City.   He is also the creator and writer of a book that was a game changer for me, in creating 16th and 17th century clothing, The Modern Maker Vol. 1: Men’s Doublets.  I asked him the question of what the difference between costuming and clothing was, and where the line in

the sand was drawn.

“The basic differences begin when you decide to make the garments…the first steps.  For example, when a “costume” is made, it is a garment or garments meant to express many things essential to a character and to relay that information visually or simple and accessible way for the audience to understand.  Power, beauty, fiendish tendencies, darkness, weakness etc.  Clothing in contrast is much less a billboard for a character and more an extension of a person.  It’s more subtle, less contrived…it’s the choice of construction methods.  Clothing has been put through centuries of development and especially, where tailored goods are concerned, there are many processes which costume makers tend to skip because they aren’t  necessary…because time and skill are often factors which lead to omission of techniques that otherwise would have been present in an historical context.”                    – Mathew Gnagy

At the bottom line, his answer lined up perfectly with what Dan had made be recognize, but I was unable to put into my own words.   Mathew continued with saying,“The very choices you make for the FIRST STEP of a garment, set you on the path to clothing or costume.”  YES.  This is exactly what it is about.  What is your intention?  What is your purpose?

Mathew, Dan, my friend Harlie (whose sewing studio, Silver Linings Studio is the BOMBdotCOM), and a friend of the Trayn’d Bandes, Efry,  all made me recognize this exact thing:

Why are you doing this?   What is your reasoning?

All four of them reminded me, separately, and in their own words, that philospophically and physically there are differences.  That regardless of whether we use a specific word, it isn’t about the word being used, it’s about the intention.   That is what it all boils down to.   What is the intention?  Mathew put so well that, “If your intention is to make something,  that in looking at the person; a character is conveyed, through color choice, material choice, etc. and you are playing “dress-up” and putting on a contrived character, that falls into the category, where it may be considered a “costume”.  However,  maybe through your creation of the garment you are allowing yourself to experience history, and a lifestyle and you are doing that through dress and culture; you are still who you are. You are trying to get into the mind of a person from history and understand where they come from and what their experience was, all while using fabric and clothing to bring yourself closer to the past.”

If you look into specific communities, that is maybe where the line in the sand is found?  Another argument that could be made is that the difference can be found between whether you are sewing on a machine or sewing by hand.     Maybe that is where the separation is?   But maybe it isn’t the stitching?  Maybe it is about the process?   Maybe it’s the fabric and whether the fabric is dyed by machine, or dyed by hand?   Maybe it is what you are expecting to present to your audience?  Maybe it’s the pattern you use?   Maybe it’s the venue in which you show you work?   But maybe what it comes down to is this…. Maybe, on the broad spectrum,  we should just celebrate what people accomplish?

At the end of the day, we all do this for different reasons, and that is great.  There isn’t a RIGHT reason or a WRONG reason to do this in the broad sense, and if you are wearing your best work, ROCK ON.  Whether it is a Simplicity pattern or one you drafted off of an image from the 1570s, if you are wearing the best thing you can do, and you feel proud of what you are wearing, who are we to judge?  Whether it is a “costume” or a piece of “clothing”….does the word choice really matter?  Maybe it does?  Maybe it doesn’t…

“People tend to be really thin skinned in our modern world and there is so much to be gained from collaboration among enthusiasts that if one gets their nose bent out of shape over a WORD…then they’ve completely lost out on the opportunity to learn from each other in much bigger ways than semantics.” – Mathew Gnagy

The base question for this post, did the exact thing I expected (and wanted) it to.  It challenged me to rethink my own understanding, and also form new opinions, and ask new questions….new questions that I want to continue to explore.   (Trust me…this isn’t the last time you will hear about this…)

Harlie put it perfectly when she said this to me, ” …Just accept that we’re all different… “

Special thanks to Mathew, Efry, Harlie and Daniel for their insight and opinion.   Thank you also for not only being a colleague in this wonderful and very broad community, but also for being my friends.