The Trayned Bandes of Bristol

We March On Our Stomachs – Hippocras

As the season changes and the weather turns colder, the want for a warm beverage  becomes a constant craving.  While a cup of hot tea generally hits the spot, sometimes the desire for something… with a bit of a nip… is what is called for. 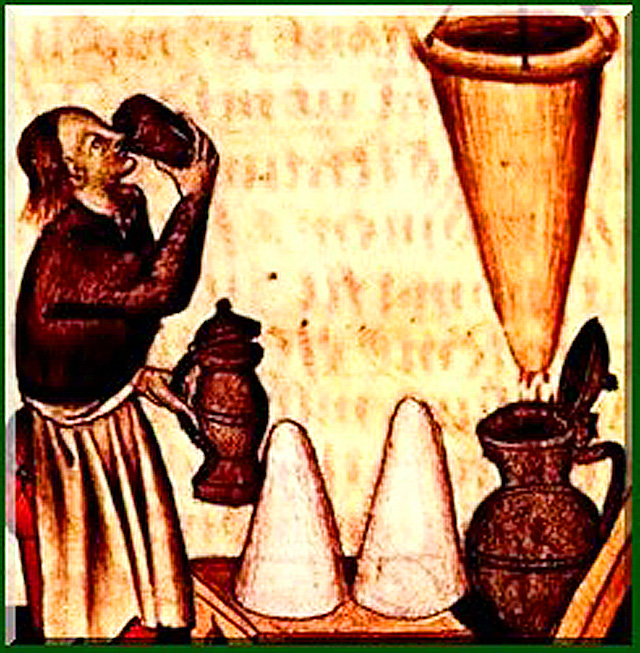 A vintner enjoying his labor, while the sleeve of Hippocrates does the work for him.

In the top secret Trayn’d Bandes test kitchen, I found myself trying my hand at a recipe for Hippocras, a wine that was consumed at the end of a large and wealthy feast, in order to balance the humours.  The sweet and spice of the wine, aided in digestion and   Hippocras takes its name from the tapered bag shaped like the Sleeve of Hippocrates (used by apothecaries, vintners or housewives) to strain the spice from the liquor.

I went to a source that has yet to lead me astray, A Boke of Gode Cookery  .  In their book, they have a recipe for a Potus Ypocras/Hippocras from 14th century England.   Originally, the recipe was found in Curye on Inglysch: English Culinary Manuscripts of the Fourteenth Century edited by Constance B. Hieatt and Sharon Butler .

Generally, I find myself adapting their modern recipe translations, and adding my own twist, with good results.   This time, I decided that I wanted to take their translation, and see what I created from there.    Also, their adaptation indicated that after mulling the wine, it would need to be bottled and served at least one month after it had been made.   I didn’t have the bottle (or the patience) to do that, so that solidified that I should try it on my own, and see what resulted from it.

– Hieatt, Constance B. and Sharon Butler. Curye on Inglish: English Culinary Manuscripts of the Fourteenth-Century (Including the Forme of Cury). London: For the Early English Text Society by the Oxford University Press, 1985.

Now in looking at the Gode Cookery translation, it is evident that the original authors were not making a small batch.   I knew that I would need to modify the amount the recipe called for as well as some of the spices it required. While all of the spices indicated are attainable, they were not in my pantry. 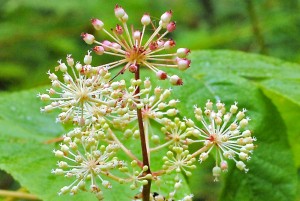 I would not readily have access to spikenard (a flowering plant which is used for digestive relaxation), grains of paradise (a citrusy pepper based spice found in the ginger family) or galingale (a spice found in the ginger family).   Additionally, the recipes did not indicate how much wine would be needed for the base, so that was something I had to factor in as well.   I kept going back and forth between the original and Good Cookery translation, and assumed that it had to just be a given.   After researching the origins of the different spices indicated and what their flavor profiles were, and only one failed attempt, I came up with the recipe below.

Put the wine and sugar into a dutch oven or kettle over medium high heat.   In a small bowl, combine all of the remaining ingredients and set aside.   Once the wine and sugar has begun to boil, remove from the heat and add the bowl of the combined spices, stirring them in completely.   Cover and allow the kettle to sit for at least 2 hours.  The longer it sits, the more spiced the wine will become.   Do not let it sit for more than 24 hours.    When it has sat for as long as desired,  ladle the wine over the cheese cloth into a bowl or serving vessel, allowing the cheese cloth to catch the spices, and filtering as much residue from the liquid.   This process can be repeated multiple times if desired, changing out the cheesecloth in between each filtering.   Serve the wine room at temperature or warm the wine through before serving.

As I referenced earlier, the recipe above was my second attempt.   I will be the first person to admit, that you can have really bad mulled wine, which is essentially what hippocras is.   With my first attempt, I did exactly that, I made really bad mulled wine.  The flavor profile was the same, however the spices were completely out of balance.  I had too much clove and used black pepper instead of white.  The taste that was left in my mouth was too spicy and  and not enough sweet, and it had that bitter taste that is left in your mouth after drinking orange juice that has gone off.   And if you have never experienced that taste, trust me…it’s not pleasant.

On my second attempt, I looked at the amount of spice I was using, and worked on finding a more even balance and a smoother finish, and I feel like I definitely succeeded that time around.

Bring this Hippocras to your holiday gatherings (and do so responsibly).   If you decide to go rogue and try out your own version of the recipe, let us know!  We would love to hear how yours turns out.

Bande News, Living History, We March On Our Stomachs

“Exit, pursued by a bear.” – The Theater