“Exit, pursued by a bear.” – The Theater

In this three part series, we explore English Renaissance Theater – Starting from the roots of it’s creation and it’s overall history, moving forward to it’s most famous playwrights and finishing with the accessibility and impact of theater throughout the latter half of the 16th century.

When one thinks of theater in the Elizabethan time period, the majority almost immediately thinks of William Shakespeare, The Globe Theater and Queen Elizabeth I.   That however, is simply skimming the surface of a rich, albeit short, period of theater history.

The Tudor era was wrought with pageantry. King Henry VIII and his subsequent heirs (specifically Edward and Elizabeth) were intent on making dramatic and lavish royal entries and having a court filled with entertainment of all types. Poetry, music, pageants, parades and masques were all present at court, composed by young men who haunted the court in hopes of securing a political office. “…they were expressive and eloquent, ostentatious and pleasure-loving, not industrious or hardworking, but bold and self-confident, markedly fearless of death, mercurial and inconsistent, loving change, above all, passionate” (Rowse 353).

Everyman was a popular morality play of the time.

These young men, many of whom were educated at a University level, brought forward the Greek and Roman models of tragedy. Writers also were inspired by the mystery and morality plays of medieval England. These plays were complex retellings of legends based on biblical themes, and stories of man being challenged and tested by an overwhelming passion or desire. All of these components, when combined, played a vital role in the shaping of public theater, and the creation of an eighty-year period of time known as English Renaissance Theater.

During the Christmas season of 1561, England saw it’s first tragic play The Tragedie of Gorboduc by Thomas Norton and Thomas Sackville. 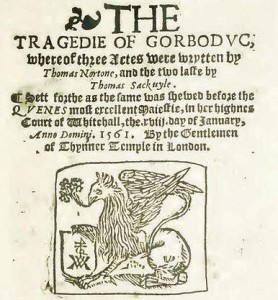 An early manuscript of Gorboduc.

The story tells of Gorboduc, King of Britain, dividing his kingdom between his two sons.   The sons argue, and the younger kills the elder. The mother, who loved the elder son more, kills her younger son. The people of the kingdom, moved to anger, rise in rebellion against the king and queen, and kill them. The nobility, then kill the rebels. With no heir to the throne, a civil war begins between the nobility, and in the end the majority of the noble and their issue are killed, and the land is left in complete desolation.

As you can gather from the synopsis, it has just a SLIGHT political commentary, and is deeply tragic. Gorboduc, was written in blank verse — unrhymed iambic pentameter — verse of five feet per line, with the stress on the first beat of each foot. The play was first produced at the Inner Temple, one of the four inns of the court. The Gentlemen of the Inner Temple then performed it for Queen Elizabeth I during January of 1562.   This tragic form of drama began to flourish, as well as the way in which theater was produced. 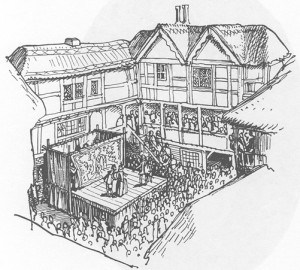 Inn Yards were a very popular location for plays to be produced.

Traveling companies of performers; minstrels, actors, singers and storytellers, had been attached to households of noblemen prior to the reign of Elizabeth I. These companies, such as The Gentlemen of the Inner Temple, became the foundation for the professional theater companies that would grace the public theater stages. They travelled from city to city, performing in places such as inn-yards, town squares, halls, and any other open space that could accommodate a large crowd. In 1572, as a measure to avoid the plague, a law was put into act stating that any company of actors that lacked formal patronage would not be licensed to perform.   This led to the companies finding permanent residence near their noble and wealthy patrons. 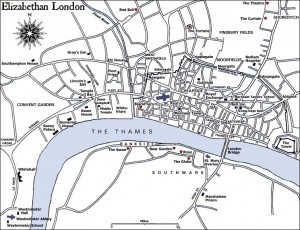 The majority of theaters (marked with a red heart) were located outside city limits.

Civic authorities in London and other major cities were generally hostile towards public performances for many reasons. Primarily, theaters and actors were looked at as attracting subversive attention, and in 1575, all players and companies were expelled from London.   This led to the companies migrating across the Thames, outside of the jurisdiction of London. The first successful public theater, the Theater, was constructed in 1576. Others quickly followed, including the Rose (1587), the Swan (1595) and mostly notably, the Globe (1599).   The establishment of large and profitable public theatres was an essential enabling factor in the success of English Renaissance drama. Once they were in operation, drama could become a fixed and permanent rather than a transitory phenomenon. These large, three tiered, open air theaters could accommodate over 800 seated guests, with an additional 700 spaces for standing guests, called groundlings. With these fixed locations, large seating capacity and range of ticket prices, it allowed theater to become a form of entertainment that was accessible by people of all social classes.

As Elizabeth I’s reign continued, theater continued to grow in popularity and it began to change.   The Blackfriars Theater, which came into use in 1599, became one of the first private theaters in city of London.   The Blackfriars Theater did not find a home across the Thames with the theaters, but within the city limits.   Much smaller and shielded from the elements, this roofed theater allowed plays to be produced at all times of day, not just in the afternoon like the public theaters.   Due to the smaller seating capacity, ticket prices were also not as accommodating to every economic level, and the middle and upper class made up for the audiences in these private theaters. 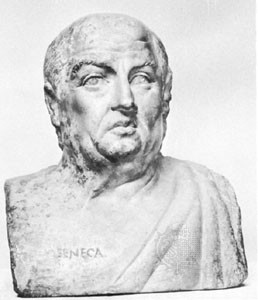 These private theaters began to grow in popularity, and the newest playwrights were having their newest plays produced at these exclusive theaters.  Towards the end of Elizabeth’s reign, plays were becoming more edgy and human conditions were becoming more exaggerated.   Playwrights were drawing more and more from Seneca’s model for tragedy, focusing on human being’s capacity for egocentrism and ambition.   The extremes of human behavior were being brought to life on stage, in both comedies and tragedies, and the audiences loved it.

Theaters began to continuing push the edge of the envelope, and this continued throughout the reign of James I and his son Charles I. However the Puritan faction, who had steadily developed power in London, always had a strong disdain for theater, feeling that it was sinful and unnatural. When the Puritan party took control of Parliament in 1642, they began the banning of plays being staged in the theaters. 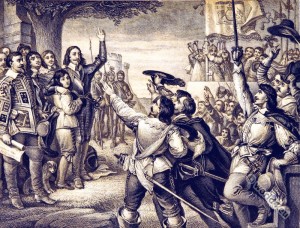 Charles I and the repercussions of the English Civil War brought an 18 year ban on producing theater.

The text of the act is as follows: “Whereas the distressed Estate of Ireland, steeped in her own Blood, and the distracted Estate of England, threatened with a Cloud of Blood by a Civil War, call for all possible Means to appease and avert the Wrath of God, appearing in these Judgements; among which, Fasting and Prayer, having been often tried to be very effectual, having been lately and are still enjoined; and whereas Public Sports do not well agree with Public Calamities, nor Public Stage-plays with the Seasons of Humiliation, this being an Exercise of sad and pious Solemnity, and the other being Spectacles of Pleasure, too commonly expressing lascivious Mirth and Levity: It is therefore thought fit, and Ordained, by the Lords and Commons in this Parliament assembled, That, while these sad causes and set Times of Humiliation do continue, Public Stage Plays shall cease, and be forborn, instead of which are recommended to the People of this Land the profitable and seasonable considerations of Repentance, Reconciliation, and Peace with God, which probably may produce outward Peace and Prosperity, and bring again Times of Joy and Gladness to these Nations.”

With the enactment of this law, the production of full-length plays were not allowed. Smaller, short comical plays called Drolls, were still performed but not in any of the theaters, which Parliament found a new use for. This continued for eighteen years, and in 1660, the monarchy was restored and the works of the English Renaissance were restored on the stage as well.

The intense amount of growth that occurred during the eighty years in which English Renaissance theater took place is nothing short of extraordinary.   It brought out some of the greatest and most influential playwrights the world has ever seen.  It also allowed people  to come together and have an accessible form of entertainment, regardless of social or economic standing.   It changed the world.

– Keep reading next week for the second installment –

Ribner, Irving The English History Play In The Age Of Shakespeare,, 1957