In this three part series, we explore English Renaissance Theater – Starting from the roots of it’s creation, moving forward to it’s most famous playwrights and finishing with the accessibility of theater in throughout the latter half of the 16th century.

This statement is one that is heard with great frequency.   But is it true?

Any playwright from the English Renaissance who is not William Shakespeare tend to be overshadowed by his reputation and popularity.  England during the renaissance was a place in which live theater was mass entertainment.  To keep people coming into the theaters on the south bank, required a constant stream of new plays to be created.   While Shakespeare became prolific over the course of history, he was not the only hardworking playwright of the English Renaissance, nor was he the best.   He had plenty of competition.

The first known English play to be written in blank verse was Gorboduc, written in 1561 by Thomas Sackville and Thomas Norton.  The use of this blank verse or unrhymed iambic pentameter, refers to the meter of a line of poetry. The line has 10 syllables, and the emphasis on the syllables alternates-every other syllable is stressed. This approach was a complete shift in how things were being written.    From this point on, many playwrights of the English Renaissance used this technique in their writings.    So, while many credit Shakespeare for creating blank verse, it simply isn’t accurate.

Sonnet 18 is a clear example of Iambic Pentameter.

Shakespeare was also not the first successful playwright of the time.   Christopher Marlowe was indisputably the foremost English playwright preceding Shakespeare.  Marlowe was the son of a cobbler, and attended Cambridge on a scholarship, and upon graduating began writing for the stage. 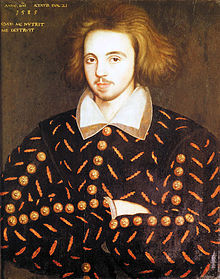 Marlowe’s first play performed on the regular stage in London, in 1587, was Tamburlaine the Great, about the conqueror Tamburlaine, who rises from shepard to war-lord.   This play, combined with Thomas Kyd’s The Spanish Tragedy,  marks the beginning of the movement in English Renaissance theater where the strongest and greatest plays were written.     Marlowe’s use of blank verse and over-reaching protagonists is found in all of his plays including The Jew of Malta and Edward II.

Marlowe’s most famous work however, is The Tragical History of the Life and Death of Doctor Faustus or more commonly Doctor Faustus.   The German story, Faustbuch, was the first dramatized version of the Faust legend of a scholar’s dealing with the devil. While versions of “The Devil’s Pact” can be traced back to the 4th century, Marlowe deviates from the story substantially.  Doctor Faustus is a well-respected German scholar, grows dissatisfied with the limits of traditional forms of knowledge—logic, medicine, law, and religion—and decides that he wants to learn to practice magic.  He makes a pact with the devil in order to do so, and  when he begins to have second thoughts and try to break his pact with the devil, he is unable to do so, and is carried off by demons.

His work was popular, primarily due to the popularity of actor Edward Alleyn.   Alleyn was a major actor in London, and stood over six feet, giving him a strong presence on stage. The roles of Barabas (The Jew of Malta) , Tamburline and Doctor Faustus were more than likely written for him.    Alleyn also had a company of actors, The Admiral’s Men, who used Marlowe’s plays as a foundation of their work. 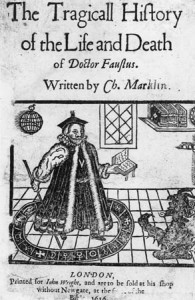 Marlowe’s career however, was short lived.   In early May 1593, several bills were written and posted around London, threatening the Protestant refugees from France and the Netherlands.   These bills alluded to a much of Marlowe’s writings, was written in rhymed iambic pentameter and was signed Tamburline.   In response to this, the Privy Council ordered the arrest of those responsible.   Thomas Kyd, a colleague of Marlowe and Shakespeare, was arrested.  Upon searching Kyd’s rooms, a heretical writing was found.  Kyd  insisted that the writing was Marlowe’s, and a warrant was issued for Marlowe’s arrest.    Marlowe turned himself in, and was told that he needed to give his daily whereabouts to the Privy Council.  On May 30th, 1593, Marlowe was killed.   The reason for his murder is one that is still debated today.   Many say that it was the result of a drunk tavern brawl, some say it was an assassination attempt.   Regardless of the reason, his death ended what could have been an even more substantial contribution to the English Renaissance.    That said, his influence on Shakespeare seems as personal as it was professional; Shakespeare pays tribute to him in As You Like It when Rosalind quotes a line from Marlowe’s unfinished poem, Hero and Leander.

Ben Jonson was a parallel opposite to Marlowe.   Jonson’s career spanned almost the entire length of the English 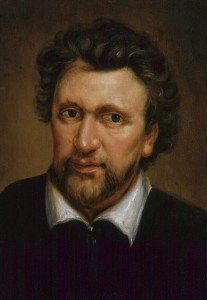 Renaissance, and his poetry and comedy, found very little competition.  His earliest notable work, Every Man in His Humour, was performed at The Globe featuring William Shakespeare among the cast members. He’s acknowledged as the first unofficial poet laureate of England during the reign of James I, and his literary circle at the Mermaid Tavern included some of the foremost writers of his day. Jonson could also be prickly, as evidenced by his stinging satires of other London playwrights. His most renowned works are the comedies Volpone, or The Fox and The 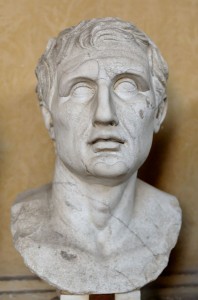 Menander – a Roman playwright whose Old Comedy model was used by Jonson.

Alchemist.   Educated in the classics, Jonson drew heavily from the comedic model set up by the Roman writers Menander, Plautus and Terrance, all of whom used satire to comment on personal and political situations.    Additionally, he drew on the English tradition of medieval morality plays, where actors personified human characteristics such as Virtue, Vice, Lechery or Curiosity to illustrate moral lessons. The plots were generally limited, since the moral points were universal rather than specific.

Jonson welded all these influences into a theatre that was purposeful and aimed at playing a critical role in society, and they made a noticeable impact.

Jonson’s Volpone, tells the story of an elderly Venetian of the same name, who connives with his money-crazed servant to convince his greedy friends that he is dying, knowing that each will try to curry favor with him in order to be named his heir. He is inundated with valuable gifts, and soon finds himself entangled deeper and deeper in a web of lies.

This comedic story, and his other works, found massive success in the English theaters.   Primarily due to the fact that the characters—or better said, caricatures—were  recognizable.   Jonson was directly commenting, through a comedic lens,  the pomposity of the legal system and the hypocrisy of wealthy lawyers who are prepared to argue anything for a price.    Jonson wasn’t afraid to make a mockery and shed light on people that could, without a doubt, retaliate for his satirical critique.  His comedies brought a new realism as well as a sharp eye for outlining human character types. As one writer commented, he gave “a new sense of the interdependence of character and society”. His works continued to be produced and found consistent success on the south bank.  His reputation rivaled Shakespeare’s until the eighteenth century, where his work began to fall into obscurity.

These two men are just the tip of the iceberg in regards to impactful English playwrights.    Over a dozen more playwrights wrote and had their work produced for the English audiences of the 16th and 17th centuries.  Why then, are we in the 21st century, still under the impression that Shakespeare was in fact the greatest playwright of all time?

Very simple.   He understood the concept of branding and putting his name on his work.    In the 16th century, to have your work produced was one thing, but to have it published was a completely different.   Scripts were usually the property of the theater company, not the author. These companies had little interest in printing copies that would only make it easier for someone to steal their material. Furthermore, many playwrights worked 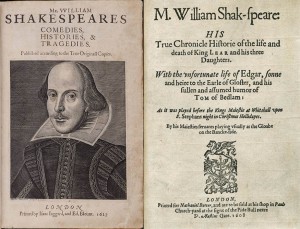 The title page of the First Folio.

collaboratively on scripts for the various theaters and didn’t always get proper credit for all their work.   Shakespeare didn’t allow that.   He owned full rights to his plays, performed in many secondary roles in his productions, was a shareholder in the acting company (Lord Chamberlains Men) as well as part of the Globe Theater.   In doing this, he ensured that his work remained his, and it was produced the way he intended.    This resulted in him having a canon of work that was entirely his own, which no other playwright could compare to.   The publication of his First Folio in 1623 ensured that Shakespeare—reputation and talent aside—had a posthumous advantage over his peers, whose works have been largely obscured or lost to history.

It is without a doubt important to recognize that while Shakespeare has made a profound impact on the world of theater.  That said, it is evident that there were many other playwrights who influenced the people then of England then, and continue to influence the world now.  How and why those people were impacted, and why the world of theater exploded over this eighty year period is different story.

– Keep reading next week for the third installment –