In this three part series, we explore English Renaissance Theater – Starting from the roots of it’s creation, moving forward to it’s most famous playwrights and finishing with the accessibility of theater throughout the latter half of the 16th century.

Long before the invention of modern technologies, such as television, movies, video game systems and the ever popular internet, people during the English Renaissance created activities and events to keep themselves entertained. “…they were expressive and eloquent, ostentatious and pleasure-loving, not industrious or hardworking, but bold and self-confident, markedly fearless of death, mercurial and inconsistent, loving change, above all, passionate” (Rowse 353). And one of their main passions was theatre.

Theater has been a form of mass entertainment since Ancient Greece.   It began at Dionysia, an ancient dramatic 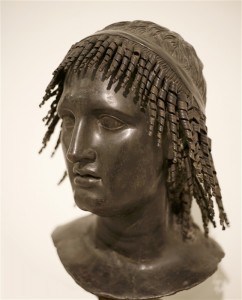 Thespis was considered the first actor

festival in which tragedy, comedy and satiric drama originated. It was held in Athens in March in honor of Dionysus, the god of wine. These festivals and performances were attended by all Athenian citizens, both men and women, and became an integral part of Greek life.   Part of this festival, included the Dithyramb, a choral ode sung by fifty men as a way to honor Dionysus.   According to legend, Thespis, one of the choral leaders, left the chorus, jumped on the alter and took on the role of “the god”. It was from here, that tragedy as a popular form of entertainment, began to take shape.  Religious undertones began to be put to the wayside, and relatable situations and topics began to be the focal point of the stories being created.  As civilization progressed, the Greeks influenced the playwrights of the Romans, the middle ages and the Italian and English Renaissance.

Theater was for people during the English Renaissance, what going to the movie theater is for us today.  People went to the theatre to be entertained, and people from every social class, rich and poor gathered in the playhouses to be entertained.    Going to a play in 1580s England, not only involved the actual act of going to see the play, but it was about paying a sum of money to enter and mingle with other genders and social classes. There was an undertone of equality, even if it didn’t actually exist outside of the theater.   Every social and educational level was included in an English theater’s audience, and everyone was seeing and hearing the same story in a common space.

Going to the theater was an active decision for the majority of London citizens, as many of the theater’s were not actually within the city proper.   Theaters were built on the South bank of the Thames River, where a good deal of the brothels and house of ill-repute existed.   However, the city of London did not approve of theater because public performance were thought to be a place where unseemly and unlawful behavior could fester, as well as be a breading ground for the much dreaded plague.  (Howard 73)  Additionally, they did not approve of the fact that it allowed for people of mixed social classes to exist, and so many theaters found their place on the South bank, away from the judgmental eye of London politicians. 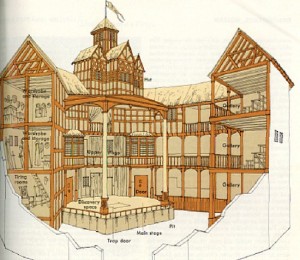 A cutaway of The Globe

Theater was produced during the middle of the day, beginning at roughly two o’clock and last roughly three hours, when there was still substantial daylight.  During the months when dusk would fall earlier, candles were used, but not regularly.    Theaters were not equipped with artificial lighting, and so this required the imagination of the audiences during scenes that were to take place at night.    This is not to say that English audiences didn’t crave for realistic effects to occur as well.  Special effects were a spectacular addition at the theaters thrilling the audiences with  smoke effects, the firing of a real canon, fireworks (for dramatic battle scenes) and spectacular flying entrances from the rigging in the heavens, the area above the stage (Elizabethan Era).  The stage also featured trap doors to serve as graves, or to allow ghosts to rise from the earth, such as the ghost of Hamlet’s father in Hamlet.

Productions began with the blowing a trumpet and the hoisting of a flag on the outside of the theater, announcing that a play was about to begin.   Red signified a history, black a tragedy and white a comedy.   The Globe also had a specific flag, Hercules carrying a globe on his shoulders, to announce a new play premiere.    Playbills were available at the theater for anyone who sat in seats outside of the pit.  Those in the pit were called Groundlings, and they were generally those of lower social class.  The price of entrance varied from theater to theater, but it was roughly a penny to sixpence for the pit, with box tickets costing half a crown a piece.

The majority of theatre performances were often two to three hours long, and the behavior of the audience could at times become very rowdy.   Audiences were very vocal about what they were seeing and experiencing with the actors 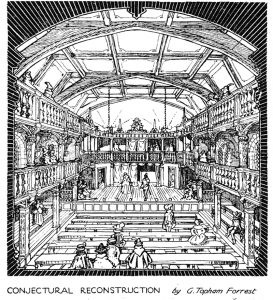 Construction of the second Blackfriars Theater.

onstage, and many did not keep quiet.  They also did not necessarily always stay for the entire play, as many of the theater patrons were working class people, who had jobs and other responsibilities to attend to.   While it is thought that upper class theater goers were better behaved than the groundlings below them, they were not without their streaks of bad behavior.   It is more than likely that they would cheer for upper class characters in plays such as Prince Hal (Henry IV) however could have been possibly bothered at a character like Sir Toby Belch (Twelfth Night), as he makes a mockery of the upper class.  Naturally the groundlings would cheer for lower class characters, and if either of these two social sets were feuding in a play, it can be assumed that arguments and pandemonium occurred in the theater.   Shakespeare and his literary colleagues wrote for all social classes, but began to move their plays indoors as well, with the hopes to produce a more refined audience.   In 1609, Shakespeare slowly began producing his plays at the indoor Blackfriars, where tickets cost more and the upper middle and upper class were the only ones who could afford tickets.

Though we know a little bit about the behavior of  theatre audiences we do not know much about the actual Elizabethan stage, however because plays of this time were written expressly for this stage, we can get an idea by looking at the stage directions in the play, and how they impacted the audience.

“Exit, pursued by a bear.” is one of Shakespeare’s most confusing stage directions.   Was there a guy dressed in a bear costume, chasing the actors offstage?  Was it a real bear?  Is it supposed to be scary or comical?  It could have been all of those things. 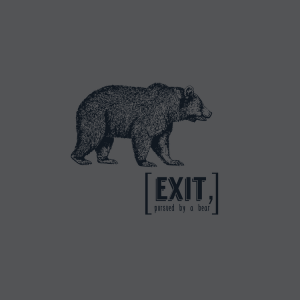 Found in Act III Scene III of The Winter’s Tale, the story is both tragic and funny.  It begins in Sicily and takes place over the course sixteen years, ending in Bohemia.  There’s an irrationally jealous king; a beautiful, pregnant queen; a foundling; a prince in disguise; a hilariously dull-witted shepherd; a personification of Time; a satyr who dances; a statue that comes to life. Shakespeare teases us as he spins his tale, encouraging misperceptions and leaping over logic. (Selby) He forces the audience to use their imagination, to draw upon a mixture of feelings and to require the suspension of disbelief, all of which make for a truly entertaining piece of theater.    In Elizabethan England, bears were familiar creatures. Men wagered on bear-baiting contests.   Theaters were situated on the side of the river where bear baiting pits were next to the theaters.   Bears symbolized anger and tyranny; some likened them to the king. On the other hand, bears also were seen as nurturing and courageous animals.     (Selby) This stage direction allowed for interpretation to occur dependent on the production, and allowed audiences to be entertained in whatever way the story captured them.

That was the essence of English Renaissance theater.  It required the plays, the theaters and the people to come together and create entertainment.    The fusion of all of these elements created an eighty year period of theater that has impacted world theater forever.  Plays are still produced from this time period.  Shakespeare’s A Midsummer Night’s Dream was the second most popular play for high schools to produce in 2016.   A recreation of The Globe stands on the banks of the Thames and produces the work of English playwrights annually.   We continue to dig deeper, find hidden meaning and examine the way in which the period of theater impacted the world.    I guess “the play is the thing”.