The Starshooters, Navigation in Tudor England

The Trayn’d Bandes of Bristol prides themselves on a great many things, one of them being the breath and depth of knowledge we have within our ranks.   This month, Trayn’d Bandes member Jeff Shoemaker discusses  a quick history of Navigation in 16th century England and an introduces a brand new  web series (found on our YouTube page) devoted to demonstrating these navigation techniques and tools in a more visual format.

William Bourne would note in the 1570s that celestial navigation, the art and science of tracking one’s location in relation to the stars, wasn’t popular in it’s infancy. Older mariners remained skeptical of pilots who used these new bow shaped tools, would “call them star shooters and ask if they had stricken [one].” (1)

This example of “kids these days” dissent perhaps recalls similar sentiments around the use of the traditional English weapon, the longbow, versus newly introduced gunpowder weapons. You can find debates of tradition against innovation occurring continuously throughout the historical moment now defined as the Early Modern period. In the case of navigation, we have traditional “dead reckoning”, which by the 1570s the English have been using for centuries, and on the other side “Celestial Navigation” recently imported from the continent. The rapid changes in English understanding of navigation in the 1550s-1580s would propel them toward financial gain and political power on the Modern world stage.

England began it’s “Age of Discovery” during the final years of the 15th century in a competitive position. Using “dead reckoning” techniques, Bristol’s own fishing fleet had discovered the “New Found Lands” surprisingly early, in the 1490s. The fleet’s summer cruising had brought them west from Iceland’s coast in search of new fishing grounds. They would find bountiful Cod fish along the coast of Newfoundland which would soon prove to be a vital food source for England.

News of the “New Found Lands” traveled quickly back to Henry VII, spurring his support to commission a Venetian sailor by the name of John Cabot (an english styling of his actual name: Giovanni Caboto). On March 5, 1496 Henry VII granted a patent to Cabot and his three sons “to find, discover and investigate whatsoever islands, countries, regions or provinces of heathens and infidels, in whatsoever part of the world placed, which before this time were unknown to all Christians.” () Cabot and his ship the “Matthew” departed from Bristol on multiple trips in the 1590s and early 1600s, which would help establish England’s early claims in modern Canada. Success was short lived, however. John died during a later voyage and when his son Sebastian returned he also found Henry VII had passed. Henry VIII had no interest in continuing to fund voyages that, although discovered lands, did not prove to have the gold, silver, or slaves that the lands the Spanish had conquered. No longer carrying the favor of the English crown Sebastian traveled to Spain in search of new opportunities.

Meanwhile on the continent, the Portuguese, in true renaissance fashion, had taken inspiration from the ancient greeks and started supplementing their dead reckoning with latitude measurements. This was first documented in 1454 during travels south along the coast of Africa. The sailors would the measure the height of the Polaris star to this star’s height at their home port of Lisbon. (It wouldn’t be till later that they would move their Latitude “Zero” to be the equator) Portuguese sailors continued down the west coast of Africa and rounded the Cape of Good Hope in 1488. Eastward they would find that strong monsoon winds would deliver them directly to areas near modern India and Indonesia. These same winds would predictably and conveniently reverse  later in the year, which which allowed ships to return with spices and cloth from various ports in the Indian ocean. These new sea routes effectively cut out all the middlemen of the silk road and proved to be very lucrative. As side note, Bristol’s port records in the 1570s show some of these spices, such as pepper, almost exclusively arriving from the Portuguese main port in Lisbon.

Meanwhile, the Spanish were busy conquering the areas of modern Mexico and modern Peru. The vast quantities of gold and silver returning to Spain payed for the soldiers defending Spanish rule against revolts in the low countries of Flanders and the Netherlands.

Recognizing the importance of sea-based trade in their growing empires the Spanish and Portuguese each set up navigational schools to equip new pilots with modern techniques. These pilots came to be seen as so valuable that the Spanish government eventually had to cap pilot wages in order to keep them from skyrocketing due to demand. (6)

By mid-century, technologically speaking England was 80-100 years behind. It held very little to no knowledge of celestial navigation and held no colonies to compete with Spain and Portugal. After Henry VIII died, England’s Privy Council devised a strategic campaign for enhancing education and technological innovation.

First, the stories of the Spanish and Portuguese colonization successes are translated from their native languages as a means to inspire the English merchants and ship owners to initiate enterprises of their own. Mathematics, a prerequisite for accurate navigation, was not a standard subject of study for the English at the time. We would see first mathematics books translated into English in the 1550s to meet this demand . (2)

In a perfect example renaissance movements within England, the introduction to the 1570 translation of Euclid’s Elements directly states that this translation is designed so that English artisans, including pilots, could compete with those on the continent.

Just like a modern company hiring a consultant, England ends up convincing Sebastian Cabot, who was now head of the Seville school of navigation, to come back to England. Cabot goes to work setting up a training bark called the “Archur” to train English navigators. He helped fund and organize an expedition to find a Northeast passage. Although the expedition didn’t succeed in discovering a passage, Cabot did set up the Muscovy company, a partnership that secured a readily accessible supply of hemp rope and timber for ships. 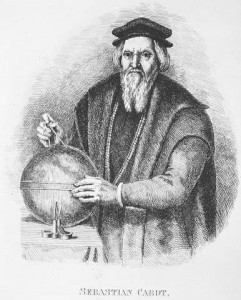 One of the few good things that can be said about the reign of bloody Queen Mary was that an Englishman named Stephen Burough was allowed to visit the Spanish Navigation school in Seville in 1558. (5) Upon his return he asked Richard Eden to translate Martin Cortes’ “Breve Compendio de la Sphera y de la art de navegar” into English as the “Arte of Navigation”. This would introduce the idea of celestial navigation to the English and mark an important transition in their power abroad. One author on the subject went as far to say that, besides the Bible, this was the most important book ever published in English. (5) It was followed in 1574 by the English native and self-taught William Bourne and his “Regiment of the Sea.”

Soon artisans from the continent would set up shop in England, bringing their talents to the country. England would see engravers to make maps or instrument makers to make celestial navigation tools for example. The blast furnace was also introduced at this time which would dramatically increase the amount of metal available to make cannons and ship parts.

The English start building ships which were more maneuverable and able to lie closer to the wind than Spanish Galleons. Spanish galleons had tall walls to prevent boarding which would catch the wind and drive them off course. The English would start to use tactics to take advantage of their more maneuverable ships and cheap iron cannons to first from a distance and never be boarded. 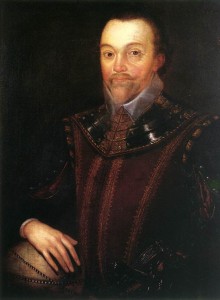 All this together would led to the rise of, as the Venetian ambassador would describe the in 1580,  the English “Sea Dogs”. These entrepreneurial individuals would get private funding to travel to the West Indies and trade with, steal from, or even sack Spanish colonies. A perfect example is Francis Drake who, after years of harassing the Spanish, would circumnavigate the globe and return home with his hold filled with stolen gold and silver. For this he was knighted aboard his own ship by the Queen herself. Needless to say, other Englishmen flocked to the sea. So much so that when the Spanish finally had enough and the famous Spanish Armada of 1588 sailed it was met mostly by privately owned ships.

Interesting to note, Bristol merchants would probably be aware of a debate forming soon after in England regarding English colonization efforts. The voyages of the Matthew are cited as precedent for claims of land to do so. However, it was the merchants, who would be probably be funding these expedition, who were worried about angering the Spanish. This would delay the English start help lead to still ernest colonization efforts not being seen till after the turn of the century.

Over the next few months, The Starshooters series will shed more light into this history by demonstrating how these navigational techniques actually worked and changed.

I look forward to seeing you on the VLog – Jeff Shoemaker