Two weeks ago, Ryan Ziegelbauer, GSM member and adjunct professor of History at Rock Valley College , brought us the first installment of Bow v. Shotte.   You can read that post here.    That said, it wouldn’t be very fair to allow the argument to be one sided.    This week, GSM member Michael Lamble sheds light on the other side of the argument.

The march of time and the wheel of fortune keep all things in a state of flux. Where Jupiter once held sway, the name of Christ Jesus is now on every tongue. Byzantium has changed hands from the Greek to the Turk. Bronze gave way to iron, and maille has given way to plate. Now the time has come for the bow, that most venerable of English weapons, to gracefully exit the stage of Mars to make way for the firearm.

A man may be taught how to load and fire a caliver in an hour. In a matter of days, he may be trained to reliably load and fire the weapon without instruction. In a matter of weeks, that same man can be trained to move in a formation, countermarch, and reload his piece as he moves to the head of the block in volley after volley. In this way, a man unlearned in the ways of war can be transformed from an unskilled knave to a soldier in under a month, so long as he is outfitted with a firearm. Not only does this allow for swift reinforcement, but offers an efficient use of otherwise wasted manpower. 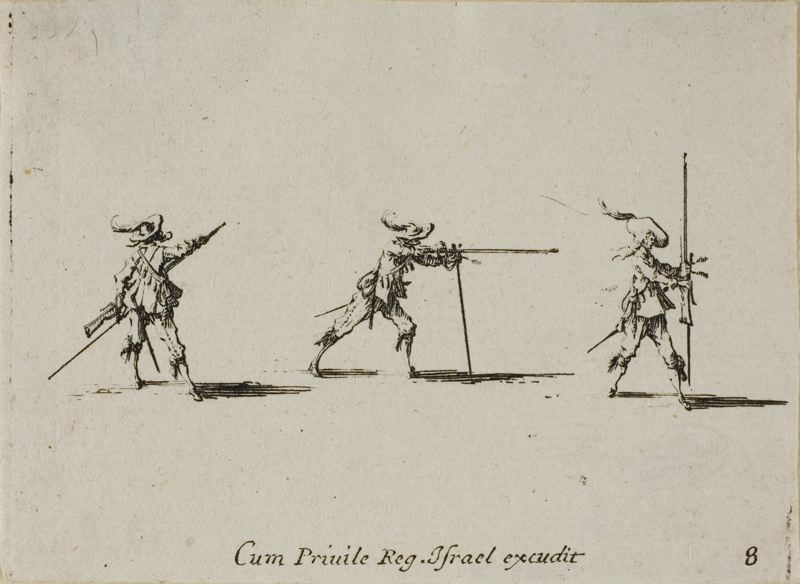 Compare this with the longbow, which takes a lifetime to master. Setting aside the impressive accuracy of some archers, the simple act of drawing the bow and loosing an arrow is the culmination of years of training. Turning back to the exceptional accuracy displayed by the more adept bowmen, such lethal precision, just like the strength to draw the bow itself, comes only after years of constant practice. An archer, then, at least an effective one, will have been at least a decade in the making, and likely longer. What’s more, the accuracy that the bow’s proponents cite as solidifying its dominance calls for the archer to practice in great open spaces, viable perhaps for the countryside but not for growing urban populations.

A month against a lifetime is quite a gulf when it comes to the necessary training of a soldier, but the devotee of the bow will hold that the time is well invested. Truly, if the firearm were but a pale reflection of the bow, this would be so. In reality, however, a black powder firearm from the reign of Queen Elizabeth I can reliably pierce a steel armor plate of the same age up to anywhere between seventy five to one hundred and fifty yards, depending on the size of the piece and the charge with which it was loaded. The bow, by comparison, has only intermittent success in piercing this same armor, and even then only when launching arrows fitted with a proper bodkin head.

Thought the musket far outperforms its counterpart against armored men, cloth, leather, and bare flesh are quite susceptible to the sting of arrows. What’s more, no army will be composed entirely, or even primarily, of fully armored men. Pikemen may expect a cuirass and helmet, and perhaps tassets and munnions for their thighs and shoulders, if their commander is generous. Billmen may expect perhaps the same, but likely less if they are based out of a more humble region, and arquebusiers, the very men who tear through the armor of their enemies, most often march off to war with the clothes on their backs, adding a leather jerkin and a simple steel helmet if they are lucky. A hail of arrows will dispatch the shotte well enough, and the bill and pikemen will surely take injuries, even if they manage to avoid taking an arrow to their face or core. What’s more, the horses of well armored cavalry often go without any sort of armor, and are thus equally vulnerable to arrows. Lead shotte wounds and kills just as well as an arrow, however. The greater volume of arrows may dispatch unarmored or lightly armored foes with greater speed, it’s true, but a block of shotte will still tear into their target effectively, regardless of how well armored they are, 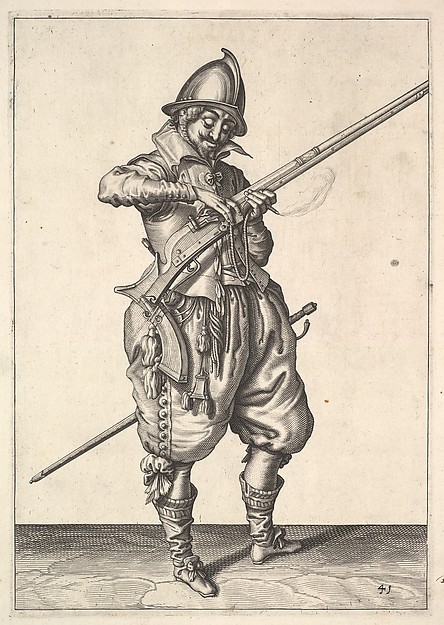 granting the firearm greater versatility for general use.

A commonly cited advantage of the bow is the speed at which a skilled archer can loose his arrows, releasing a fresh shaft every few seconds. A musket, in contrast, takes a good deal longer to prepare between shots, with an arquebusier being considered ready for battle if he can load and fire his piece in under a generous forty five seconds. Indeed, in a race between a lone archer and a lone arqusier, the bowman will win every time. But the business of war is not concerned with individuals, but with companies, regiments, divisions, and blocks of men. A cluster of archers may release a swarm of arrows out upon their enemies every few seconds, but a block of shotte will fire a new volley just as often, cycling fresh shooters to the front as their comrades reload. The volume of arrows will exceed the
volume of lead, to be certain, but is that so great an advantage? As I have already outlined, a ball of lead fired from a musket will reliably pierce steel plate, while the rain of arrows may slow and harass an advancing line of armored men, but will still kill fewer than the shotte.

There is the matter of accuracy, of course. A skilled archer may pick out a gap in his foe’s armor and exploit it, effectively circumventing the armor. That said, an arquebusier can simply pierce his enemy’s armor by firing upon it, and he does not need to have spent a lifetime honing his craft to do so. The bow is indeed accurate- in the hands of a skilled archer, at any rate- but the musket does not need to be. A row of men firing muskets or calivers straight at their enemies at chest level will wound or kill several of them, and probably at a higher rate than the bow, if the enemies are armored.

So, a company of shotte is far faster to train than archers, and their weapons pierce armor far more reliably than a bow. Where the bow outperforms the musket in terms of accuracy and speed, tactics and power render these advantages negligible. But what of the logistics of the weapons themselves? Surely cast steel barrels and mechanisms set in carved wooden stocks are a greater challenge to procure than a simple wooden stave. Indeed, the firearm is 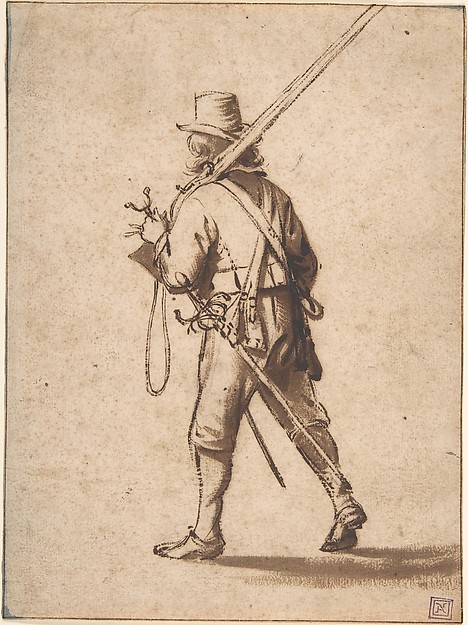 more complex than the bow, being a composite of many parts, of diverse shape and material. It is not just any bit of wood that can be a bow, however. A derelict branch or carved sapling may suffice for shooting rodents and small fowl from a short distance, but a bow that will bend with the one hundred and fifty pound draw of the English longbow, and that will cast an arrow four hundred yards, must be made more judiciously. For the stout English, a length of imported yew is the most sought after stave, but the availability of such wood, cut where the sapwood meets the heart and with a suitable grain, can vary year to year. True, the fabrication of a musket or caliver also relies on the availability of materials- steel, suitable wood, etc.- but the necessary quality is not so elusive in a walnut stock as in a yew bowstave.

If there is doubt which weapon is easier to fabricate, there can be no question when it comes to their missiles. An arrow suitable for war must be made of a good straight shaft, fletched by a trained craftsman and fitted with a good head prepared by a smith. By contrast, a musket ball can be made by any man with a mold and a vessel in which to melt lead, calling for no special skill or training. To add to this convenience, an arrow may be broken or otherwise damaged, rendering it useless, whereas lead balls are quite durable, and can even be recast if they are somehow warped.

There are indeed roles to which the bow is uniquely suited. Hunting small game, especially, but even larger

beasts are felled nicely by a well-placed arrow, and come back without a sulfurous air to them. To ambushes, perhaps, where the light and scent of match will give away your presence, and the thunder of guns will mark your position. Even to a siege, in which arrows may be cast in an arc over fortifications, wounding or killing the defenders while leaving the walls relatively unscathed. These are all specialized cases, however, and cannot justify enshrining the bow as the primary ranged weapon of an English army.

In open war, the m

usket is clearly superior to the bow. Soldiers can be equipped and trained with it quickly, allowing armies to be swiftly raised and reinforced, as opposed to the years that go into each archer. It pierces armor far more reliably than any bow, and it and its ammunition are more readily and uniformly manufactured. Indeed, where the bow exceeds the musket such advantages are soon diminished by effective tactics. Let the bow be remembered fondly for all the good it has done England, and let it continue to serve her when only the bent stave and feathered shaft will do. But just the same, let it take its ease and enjoy its retirement as shotte takes its place as the backbone of English armies.