Bow v. Shotte – In defence of the longbow

And now how com’st thou to be out of date,

And all neglected leav’st us, and art gone?

And with thee, th’ancient strength, the manly state

Of valour, and of worth, that glory won?

Or else stay’st thou, till new prized shot abate?

(That never shall effect what thou hast done)

And only but attend’st some blessed Reign,

When thou and virtue shall be graced again.

~Samuel Daniel, The Civil Wars between the Two Houses of Lancaster and York

Hearken to my words, dear Englishmen! We as a people stand at a precipice. Indomitability, which was once our exclusive God-given gift, has been lost to us due to our loose and infirm spirits. I speak of course of our cherished national weapon, the longbow. With true hearts and stout resolution, the House Plantagenet did cleave to the longbow, and it brought England a succession of martial golden ages. However, a recent string of dissenting voices have called for the adherence to a newer weapon, the black powder firearm, and some are advocating for this common weapon’s superiority to that coppiced harbinger of our past glories.

The musket’s claims to fame are few, and for clarity of truth I shall lay them out here. First is the matter of the musket’s power compared to the longbow. Second is the musket’s ease of use as regards the common soldier. Third and of least importance is the logistical simplicity of outfitting an army with musket and shot compared to a bow and arrow of the best sort. Against these claims I shall counter with the strengths of the longbow which are too myriad to give in a short list.

Firstly, let us address the matter of power. It is, of course, well known truth that black powder firearms are 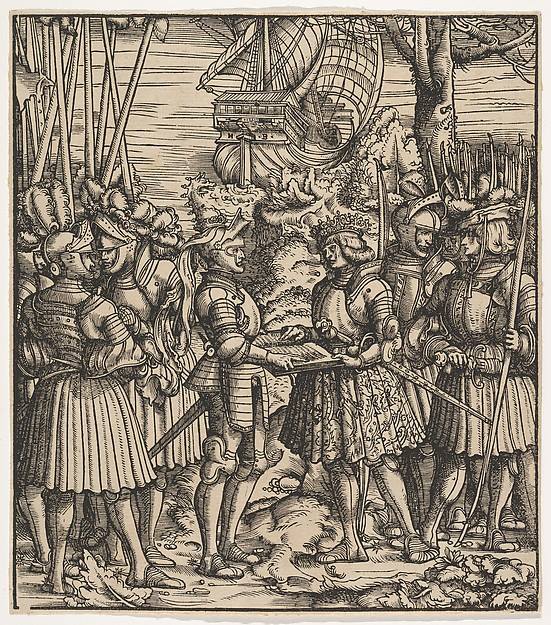 Henry VII meeting with Philip I of Castile in 1517, from Der Weisskunig.

several times more powerful than the longbow.[1] However, this is increasingly becoming irrelevant largely due to the musket’s second advantage. As armies focus ever more upon quantity at the cost of quality, the average soldier’s allotment of armor begins to wane. The penetrative power of the musket is enough to dissuade many from superfluous armor expenses, and so a soldier may oftentimes count himself lucky is he has a breastplate to shelter him on the battlefield. The relative affordability of the smoothbore musket and its companion, the pike, has driven armies to ever-larger numbers, for the two weapons are quite simple to train in and manufacture. This has, to the detriment of the fighting person, made the soldier more expendable, and therefore less encouraged to defensive means. With the exception of the wealthy, soldiers are more commonly poorly armored upon their extremities, if at all. In this environment, the bow remains potent. Even at extreme ranges, the bow is capable of incapacitating these targets, and thanks to the superior range and accuracy it enjoys over the musket, the archer is able to strike these areas with great mirth.[2]

As to armors which cannot be pierced, the archer has other strengths with which to best the wearer. Thomas Audley (c. 1550) and Sir Thomas Wilford (c. 1580) both attest to the bow’s superior capacity to harry cavalry with a blistering hail of arrows. Both John Smythe (c. 1590) and the notorious proponent of shotte, Barnaby Rich (c. 1575) remark on the ability of blocks of archers to protect pike formations from flanking maneuvers and caracoles. Here we see the grotesque vulnerability of shotte is divinely absent from the illustrious archer who so ably smites the unarmored horse beneath its steel-encased rider![3] As to the armored foe himself, the archer may prove able to strike the points of vulnerability. Even at moderate and extreme ranges, arrowshot can prove decisively accurate, striking foes in exposed or under-protected regions of the face, neck, arms and legs.[4] The relative invulnerability of the finely-armored torsos of the wealthy is of middling consequence in this regard, and therefore we may safely consider the unbridled power of the musket moot.

It has been shown that the bow’s superiority in both accuracy, range and rate of fire have afforded it the 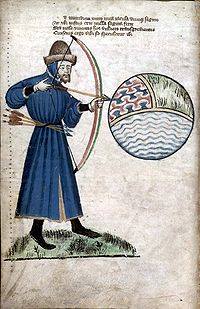 flexibility and versatility to outperform the musket in many battlefield scenarios. But the merits of this illustrious weapon do not end there! The waxed bow remains reliable in rain and humidity, while the black powder becomes impotent. Even detrimental winds do not render the bow unusable, while the virtuous tailwind aids the bowshot as it blows the shifting powder from flask and pan! Ambuscades and nighttime assaults are friends of the silent and stealthy archer, but the glowing match cord and choking smoke of the devil’s powder are suited only to the guileless officer. Best of all, the arrow’s capacity for angle of fire and wild fire make it imminently more useful for siege operations of both defensive and offensive nature, while the elevation of defensive postures make the archer’s shot ever more potent in range and power. Even on the hunt, the bow remains supreme. Is there no end to this weapon’s dominance? In truth, there is, but it is only by our willful admission.

It is true that archery has waned in England in recent decades. Roger Ascham decries the ponderous decline of archery. Men frequently skimp on their lawful obligation to practice at the butts, while feeble curs do fire now with three fingers instead of two as their ancestors did. Without the requisite skill or strength to draw the bow, the archers who took the field at Flodden or on the continent proved incapable of wielding the bow to the great effect demonstrated by past generations. But let not the challenge of mastering the bow in this and following generations deter us! Edward II had forgotten how to implement the bow and it cast England into disarray at Bannockburn and beyond. But his son did remaster the weapon, and Petrarch remarked on how the English had gone from being the ‘most timid of all the uncouth races’ to become the most dominant warriors in all of Christendom. Do not, as Shakespeare wrote King Lear to say, allow yourself to handle your bow like a crow-keeper. With an equal measure of commitment and perseverance, we too could mirror the achievements of our ancestors and reform our generation’s decline in arms. Why cast away our martial birthright to mimic the Spanish in the hopes of being merely competitive when we could devote ourselves and shortly become indomitable once more, all the while remaining true to ourselves and our heritage? Let not the glory and honor of English arms lie fallow beside the tombs in Westminster Abbey. Again I bid you, commit yourselves once more to excellence and the pursuit of perfection, and restore your kinship with the bow once more!

[1] Using remains found on the Mary Rose, an arquebus with 90 grains of powder could generate over 1000 joules of energy, enough to pierce 6 mm of steel, whereas a 150 lb. longbow firing a 3.8 oz arrow could only generate 146 joules. While there have been no tests of Mary Rose replicas on high-quality steel armors, 75 joules of force is enough for a bodkin arrowhead to drive a 6 mm diameter hole through a 1.9 mm plate of wrought iron. For further comparative purposes, it would take 125 joules to defeat both that same plate and the padded gambeson which would almost certainly be worn beneath it. Matthew Strickland and Robert Hardy, The Great Warbow: From Hastings to the Mary Rose (Haynes Publishing: Sparkford, UK, 2011), 276-8.

[2] According to the tests of Anna B. Crowley of the Royal Military College of Science, a heavy bodkin arrow of 3.3 oz, again a replica of a Mary Rose arrow, was recorded as carrying 78 joules of energy at a range of 200 m. This is capable of piercing poor armors and would be gravely injurious to an unarmored body part. Ibid, 412, 414.

[4] For an archaeological example, see V. Fiorato et al, Blood Red Roses: The Archaeology of a Mass Grave from the Battle of Towton AD 1461 (Oxbow, 2000), especially regarding Towton 2 and 40.