We came. We saw. We reenacted. – Part Two

“The Trayn’d Bandes once again, had a few shenanigans planned for their weekend at Military History Fest.”

Day Two of Military History Fest greeted us with a full encampment of pikemen and civilians and a convention center teeming with patrons.   A convention center full of patrons means – lots of people to talk to, teach, learn from and most importantly, edutain.  (Can you sense my  commitment to that word appearing in the next publication of the Oxford Dictionary?)

Saturday can adequately be summed up as the day of ALL OF THE THINGS.  The full muster of pikemen, musketeers and civilians were in the encampment.  This was ideal because of  all of the activities we had available or were a part of that day.  Members of our group had two different workshops that they were leading, our “How Not to Die” show was slated for the afternoon and we were the final destination on the scavenger hunt that Military History Fest does for kids.   Additionally , we had a new interaction piece that we are going to be using at our primary event, the Bristol Renaissance Faire, this summer and we wanted to give it a test run that weekend. 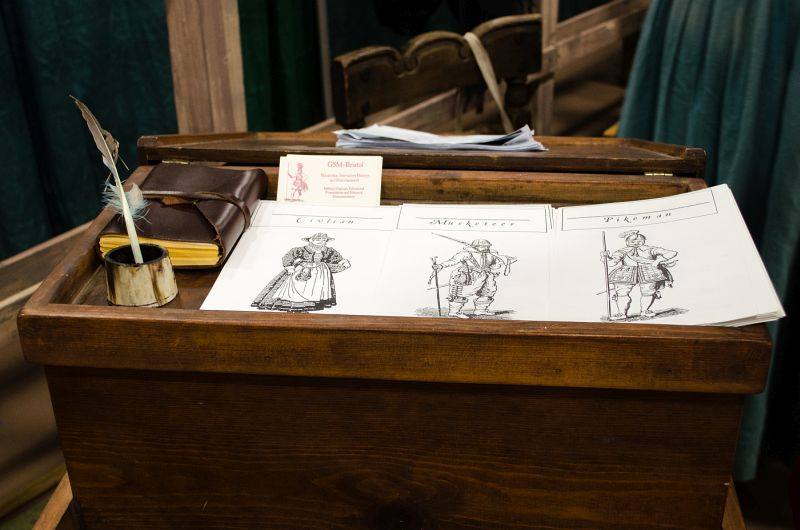 Choose Your Own Adventure

We created four different “role” cards that patrons of any age could choose from, with corresponding activities and tasks within the encampment for the patron to complete.  For example, if someone chooses a pikeman card, they need to seek out a pikeman within the encampment.   They then are taught some positions and maneuvers with the pikes, along with a few other activities that a pikeman would be a part of during their time in the encampment.  We love the idea of hands on learning, and really focus on the principal that anyone we come in contact not only has fun, but learning something at the same time. As they complete their tasks, their card is stamped and upon completion , the patron goes to the Lieutenant or Captain, where they muster to join the Trayn’d Bandes of Bristol.     We were able to use our pikemen, musketeer and civilian cards at MHF, and all were met with great success with folks of all ages.  I’m excited to see reception they get at Bristol this summer. 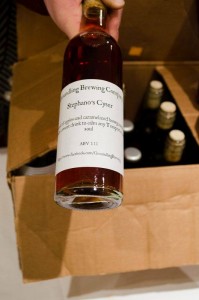 Outside of the camp, we had two really fantastic workshops that were being led by members of our group.   The first was on Historical Brewing, featuring two of our members Chris Last and Scott Borlick, who own Groundling Brewing Company .   In their panel, they discussed different historical brewing techniques and how you can incorporate the brewing process in your presentations and impressions.    For the over 21 crowd, they also did tastings of some of their historical recipes, including Antony’s Ale – An ancient blend of ale, wine and mead, Mudlark – An Elizabethan Sour Brown Ale,  Pernicious – A Turn of the Century Style Bitters and Brown Bess – A Colonial Style Porter (and my personal favorite).    They also talked about some of their other recipes, like the one on the left…Stephano’s Cyser.

The second workshop was led by our friend and member Daniel Rosen of Old England Grown New.    Old England Grown New is, “ dedicated to bringing to light how Early Modern tailors and related craftspeople lived and worked as accurately as we can muster.   It is our hop that through experimentation, we can rediscover how things really looked and functioned in historical communities.“

The workshop that they were leading focused on how handiwork has changed as time has gone on and the variety of techniques that are used in any hand sewing project.   The added bonus of the workshop was that each person was given individualized attention by one of the panel leaders on either a technique that they had learned that day, or on a personal project that the guest brought along.     It was a really unique workshop that anyone, regardless of the time period the recreate, benefited from.

Alright, I know you have been wondering when we get to the shenanigans.   You have been patient.

Now, it should be common knowledge that The Guild of St. Michael…your favorite Trayn’d Bande of Bristol…takes great pride in working hard and playing hard.    It is our preference that the two come together as often as possible, which to our great benefit, they did on this particular Saturday afternoon.

Over the past few months, we have taken to selecting an item, be it a jar of cranberry jelly in November or a fruitcake in December and asking our followers whether we should Stab It? Shoot It? or Smash It?  –  Then after the audience decides what they want to see, we film it and produce it on YouTube, so that ALL of the people can see what our weapons can do to modern items.   Being at Military History Fest gave us a great opportunity.  Not only would we be destroying common household objects, but we would get to involve other time periods…and THEIR weapons.   Our fellow reenactor friends loved being part of it, and we were able to film four installments, three of which we have premiered in our third episode.   You can check them out here.    It was great fun, and let me tell you…. Valentine’s heart shaped snack cakes taste WAY BETTER when they have been shot at you by a bunch of Romans.

Many of our hijinx occur when we are all sitting around and laughing, which is how another highlight of the day came about.  Last year, we decided (don’t ask me how it came about) that we were going to do “THE TRAYND BANDES THROUGH TIME”.   So we did just that.  We traveled through time and documented our experience in different encampments. 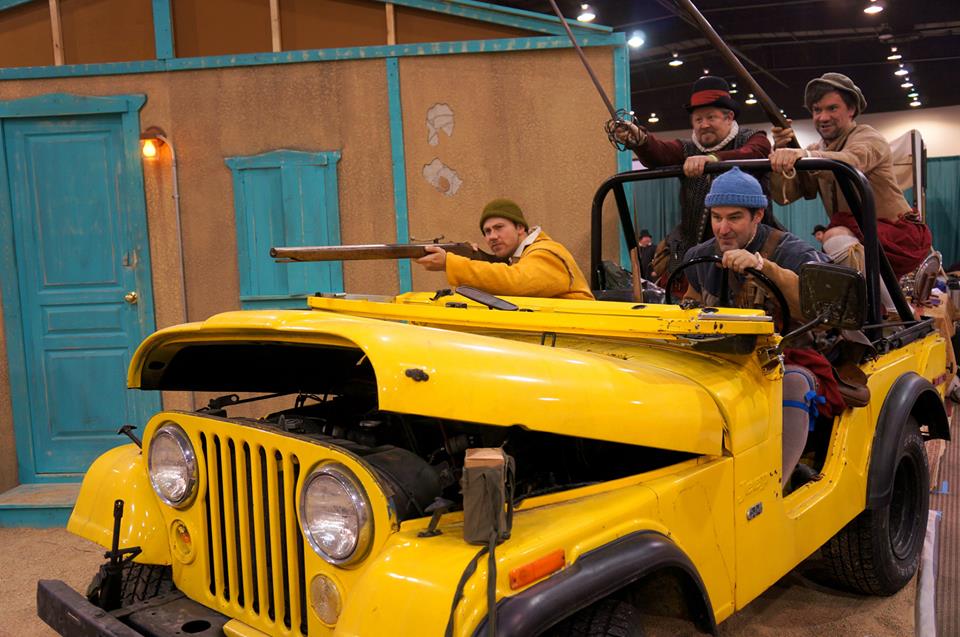 MHF – 2014
… Clearly committed to time traveling and expanding our knowledge

In all seriousness, we love our fellow reenactors, we love seeing what they do and how they interpret the time periods.   We also do truly love learning as well.  If we didn’t, we wouldn’t do what we do.   What’s great is that our fellow reenactors are always up for playing along with our crazy ideas.    We are really fortunate to have the friends and colleagues that we do, and they never mind that we infiltrate their camps.

So this year, we decided that with the new encampments that all of the different eras had, we needed to document a new series of our travels through time.   A very good friend (and the unofficial photographer) of our group, Patty Smith, was roped into documenting our journey this year…”Shenanigans Through Time”

A word about Patty Smith.

Patty is the bomb dot com.   For serious.  She started out by coming to Bristol, camera in hand, and documenting the Faire, and she now takes pictures for the faire and is always game for taking pictures for us.  She has documented through pictures and video some really wonderful moments that have happened in our group over the past few years.  All of the pictures in this post are her handiwork.  Even better, her daughter Christine has been our stage manager for the past few years at Bristol.   We have adopted Christine and Patty as our own…whether they like it or not.   I could write an entire post about Patty and how amazing she is.   (I’ll save that for another post.)    Check out her amazing work here.   Again… I love her.  We love her.  She is awesomesauce.

So yes –  Back to time travel.   So in usual GSM style, a bunch of us grabbed some weapons, put on some armour and left camp with no clue as to what we were going to do, but the underlying desire to have some fun as our driving force.   And that is exactly what happened.   Some highlights of our time travel included visiting a World War I bunker (who was recognizing the 100th anniversary of chemical warfare), discovering technology in different time periods and gambling with some Romans. There were also a few occurrences that should be left in history including discovering a new type of portrait (which apparently are not appropriate) and the Captain and one of our pikeman, sharing a tent… 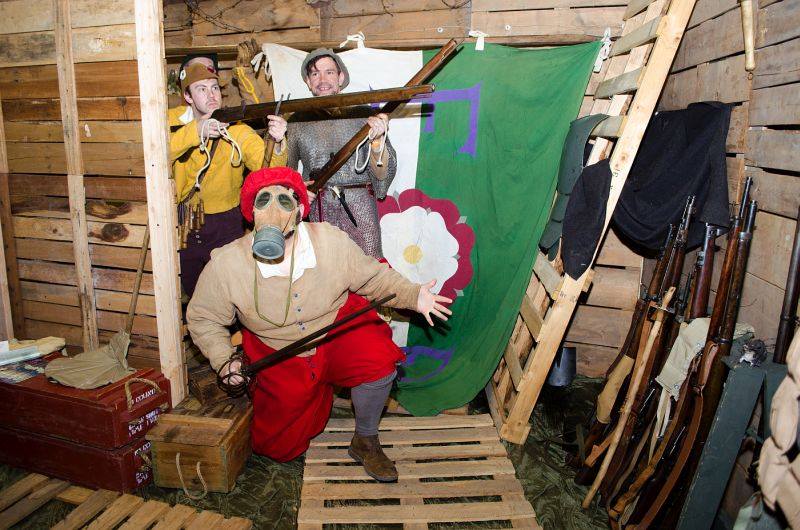 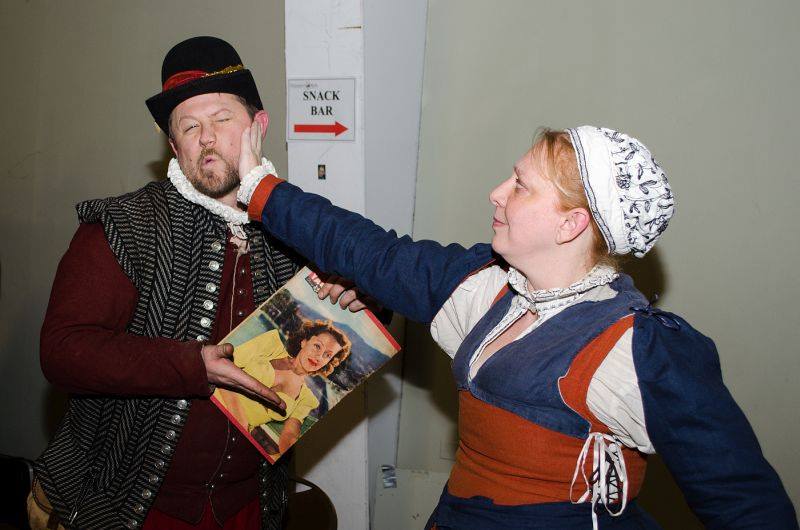 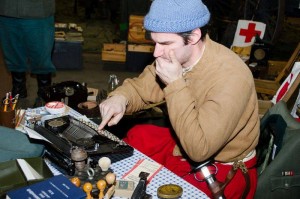 So…what does this thing do?! 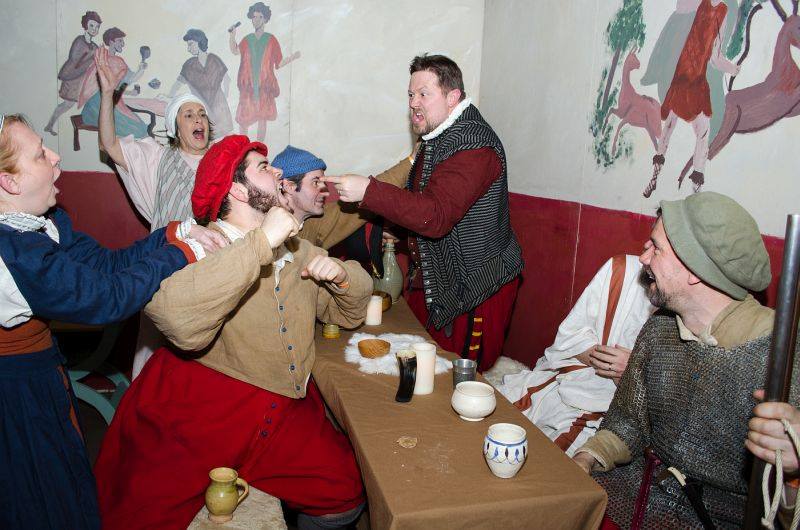 A fight in the Roman Tabernae…what a surprise that the Captain and his cousin are involved. 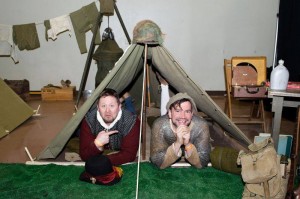 What is this pikeman doing in my tent?!

See?!  I told you there were shenanigans.

Now you would think that as the second day drew to a close at Military History Fest, we would be getting worn out and tired and would call it a night.   If you think that, then you don’t know us very well.     We were just getting started…

We closed down the encampment for the night and filled our bellies with delicious Italian Beef, cheese fries and chocolate cake from Portillos.    We needed energy for what lay ahead.

After all…there was the Military History Fest annual ball that night and we still had another full day ahead of us.