The Art of the Garden – English Gardens

This week, our assistant director (and resident Trayn’d Bandes gardener) Chris Budnick puts his vast knowledge of gardening to use, as he discusses the English garden, and how it holds characteristics unlike it’s other European counterparts.

In the first Art of the Garden post, the evolution of gardening throughout the Renaissance, started within Italy, moving outward throughout the continent, however England experienced something different.   The English renaissance garden, which had evolved in isolation for a number of years. England experienced a number of conditions that set it apart from the rest of the continent. The first and perhaps most obvious was its geographic isolation. Set far from the cultural and economic center of the Renaissance, England was slow to receive new idea and enter into this new age of prosperity.

Less obvious perhaps was the English weather. While Portugal, Spain, France, and Italy experience nearly a year long growing season, England did not. It can be argued that the Mediterranean growing season is in fact limited by water availability, but this was not an issue for planned gardens, fed by cisterns. England did not lack for water, but was limited instead by temperature. Though it experiences a mild winter due largely to the Gulf Stream, it does experience a greater winter that the continent. This would primarily come to limit the types of plants grown to those that were at least moderately cold hardy (though we can assume some unique specimens like citrus trees were sheltered indoors, much as with France).

English gardens design borrowed heavily from continental design, which by the time is crossed the channel had had centuries to refine itself. We are fortunate in our modern day to be able to see many of the original garden locations created during this time, if not the exact internal layouts. This is also due to a number of factors. First, those that could afford gardens were typically landholders that passed their property along largely unbroken family lines for centuries. Secondly, England wholeheartedly embraced the concept of pleasure gardening and it has become a cultural pastime, a tradition rejecting modernization in many cases.

Unfortunately, little evidence remains of English gardening prior to the renaissance. There is little writing about it and few illustrations. This is likely related to the civil wars that plagued England, which limited the ability of even the nobility to develop land for non-subsistence purposes.

However, starting in the early 1500’s we begin to see record of at least royal gardens. Henry VIII is said to have inherited several gardens from his father. The first well documented garden grounds are those of Hampton Court, designed by Cardinal Wolsey. The residence continued to reflect the ideas of the Middle Ages, having thick walls, towers, and a moat. However, while the structure was certainly older in design, the grounds were much more modern. The gardens stretched from the palace to the Thames, fed by water conduits that created pools and fountains. It was divided into several sections, with clearly lined gravel paths for strolling among the beds.

A view of Wolsey’s Hampton Court gardens. The garden shown is the Pond Garden

Later, the estate would come under the ownership of Henry VIII. The gardens were updated and lined in the Tudor colors of green and white. Giant weather vanes were created in the shapes of weather vanes, and the leopard (symbol of Anne Boleyn) was featured prominently. Henry further added viewing towers for his jousting field, one of which survives to this day. A private privy garden was also set aside. Further, the garden featured a covered Water Gallery with direct access to the Thames, a gazebo, orchards, bowling alleys, a domed banqueting house, and a kitchen garden. Further monarchs would continue to add their own design to the grounds. Unfortunately this means that each felt free to demolish and redesign as they saw fit, which has obscured some of what previously existed. 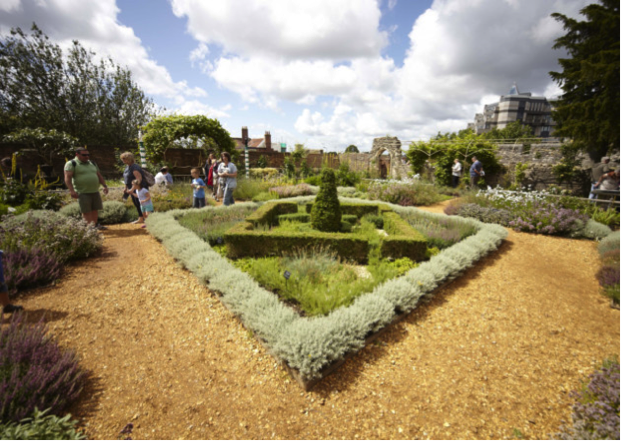 The Tudor House & Garden near Southampton, a modern recreation of a Tudor style garden

During the time of Henry VIII, pleasure gardens would come to have several new ideas. The first was that of smell. While it is certain that plants of past ages were chosen for their fragrance, the English Renaissance garden is one of the firsts to have that aspect heavily documented. Rather than being placed far from the home, gardens were placed near to it, or incorporated into the building layout, filling courtyards and corners. A common name for this was a gillyflower garden, designed to include pinks, carnations (also called sweet Williams), stock, lavender, roses, gallica, damask roses, lilies, and many other sweet smelling flowers. 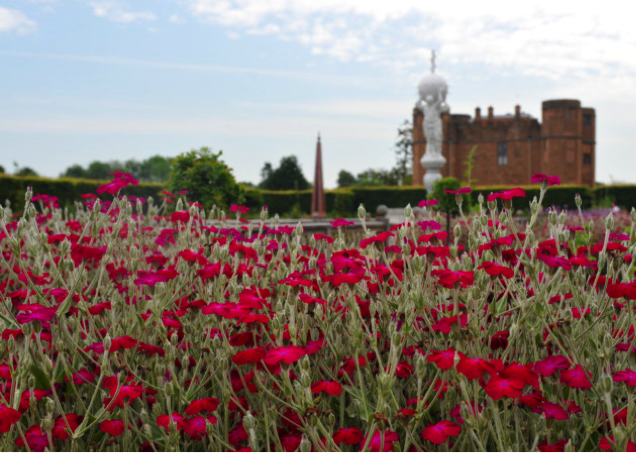 Kenilworth gardens. The garden shown is a recreation of what was likely a gillyflower garden.

The other new idea that began to entering into garden culture was that of the focal plant. While originating more in Italy than England, it is one clearly seen in English gardens. As the edges of the map expanded, explorers were constantly returning with unique animal and plant specimens. The nobility would go on to feature these in their gardens as items of novelty but also as displays of wealth. It should come as no surprise that the favored plants were those that traveled well across long distances, such as bulb plants. The most famous example of this is the tulip, originally coming from Africa. Discovered and monopolized by Dutch explorers, it is an excellent example of this style of gardening. Instead of the modern bed of tulips this foreign (at the time) plant would feature prominently in the center of a bed singly or in a small group, surrounded by walkways for viewing and accented by smaller common flowers. At the height of tulip mania as it was called (around the 1630’s) a single bulb could cost ten times the year’s wages of a skilled craftsman.

The gardens of Queen Elizabeth I were no less ostentatious, though several new elements continued to be introduced during her reign. She encouraged her nobility to build lavish estates and gardens for the purposes of hosting her. A particularly favored style was the knot garden. 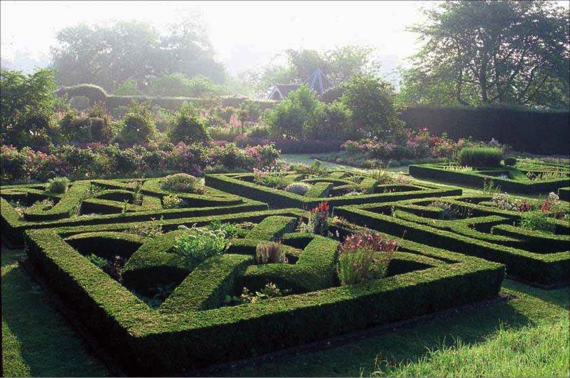 A knot garden at Helmingham. Note the featured plants in the spaces created by the “needlework”.

The knot garden is a recreation of needle work using plants to simulate the lines of stitching. Green, unflowering plants were favored to give this illusion and they were trimmed at various heights to give the illusion of the over-under of needle work. While it was not available at the time, the boxwood shrub (which readers may be familiar with) would have been an idea plant for this effect: low growing, green, and with small dense leaves.

John Gerard, and English botanist, is credited with one of the first botany books, titled the Herball or General Historie of Plantes. In it Gerard not only the shape, size, and scent of plants, but also their humour and preferred growth characteristics. Gerard counts a long list of plants in his personal garden to include tulips, daffodils, iris, roses, cherries, lilacs, and philadelphus. He was also the first to document sunflowers, the hyacinth, and the potato.

Alongside the evolution of the pleasure garden, the kitchen garden remained much the same. The primary difference was the slow introduction of foreign plants across Europe. While the term ‘vegetable’ was a little more broad (covering the meaning of any edible plant) vegetables known to the middle and lower classes included runner beans, cabbage, dill, fennel, gourds, leeks, lettuce, lovage, mustards, onion, parsnip, peas, sorrel, turnips, and (later in Elizabeth I’s reign) potatoes. It should be noted that the English had a tendency to cook or boil green plants as the raw plant was believed to be capable of unbalancing the humours. 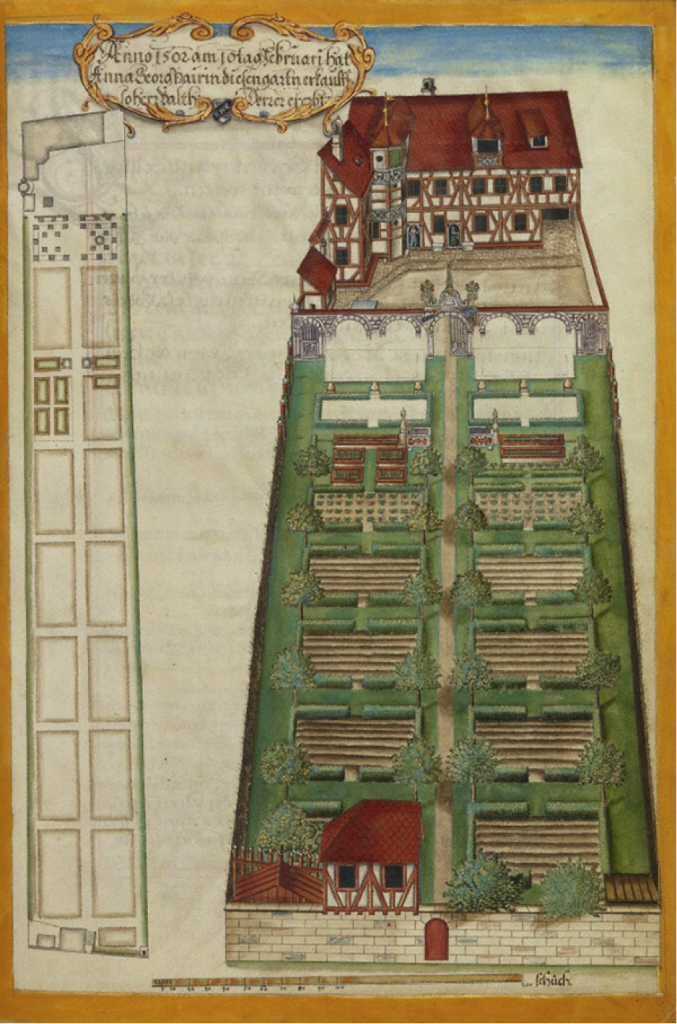 Fruit was also a common and popular dietary staple. Particularly favored by those of the middle and lower classes were those that could be preserved in jams or jellies. The best were those high in the chemical pectin, which includes apples, pears, quinces, and plums. Citrus fruits also contain pectin, but would not become available to anyone outside the nobility for some time. Figs, grapes, and some types of cherry were also known in England. Strawberries of different types grew across all of Europe and could be found equally in gardens and uncultivated spaces. These strawberries would later become hybridized with strains from the New World, yielding larger and sweeter fruits.

It can also be seen at this time the end of dependence on personal gardens. While still largely an agrarian culture, the growth of a global (or at least European) trade network ensured that foodstuffs were regularly transported across great distances. Most food was still grown locally, but a poor crop in one country did not guarantee famine as cereal grains could be shipped great distance with greater ease. The growing economic strength of the middle class also meant that more exotic foods could be purchased at reasonable prices. Oranges from Spain and Portugal, though subject to heavy taxation (or the occasional embargo), were a delicacy that the common family could afford on occasion, and they are a single example.

As you can see, gardening within England was not only something that was a hobby, it was a part of daily life and continues to be so.   Gardening was an art form and a means of life.    It’s no wonder that  as immigration occurred from England to America, that many of these ideas were brought here as America gained it’s footing in becoming a country all it’s own.