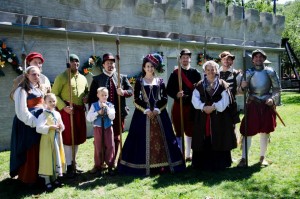 You didn’t think that just because we packed up the camp at Bristol that we were done, did you?!   The exact opposite actually.   Less than a week after packing up the encampment at Bristol, we were headed for the great state of New York!   Why you ask?   Well, as many of you probably know, Bristol is one of three fairs owned by Renaissance Entertainment Productions.   Our sister fair, the New York Renaissance Faire, had extended the opportunity for the Trayn’d Bandes to visit, and we jumped at the offer.    A smaller group of us had gone out last year, and had an absolute blast, and we couldn’t wait to return.

This year, we had so much we were looking forward to.  We were excited about seeing our friends we had made on our trip last year, the shows that are unique to the New York Faire, the Apple Cider Donuts (seriously, they are absolutely amazing…my mouth is watering just writing about them), and we were bringing one of our shows, HOW NOT TO DIE with us.   So we were off, and  over the course of Thursday and Friday, we hopped in our cars (and some of us in airplanes) and headed east to play with our family in New York.   As we arrived, were greeted so warmly and with such love and celebration, that it reminded me how regardless of mileage between us, all of those who perform at the faires are really one big family. 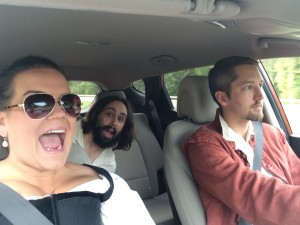 We are so excited!!!! (And Budnick is keeping his eyes on the road.)

We started our Saturday by making our trek north from the hotel in New Jersey to the town that the faire is located in, Tuxedo Park, NY .  It was bright and early but we were ready to go, and our excitement was pumping through our veins.   The commute was at the right time of day so that we could see the valley and mountains that surround faire, coming to life for the day.  It reminds me quite a bit of the northwoods of Wisconsin, filled with small town charm and the beauty of nature everywhere.

We all arrived at the Faire and headed to our area to unload our gear before we headed up to join the rest of the cast at morning meeting.   The amazing folks at the New York Renaissance Faire had given us a beautiful tent and space for us to spread out and become part of the village.  Just like at Bristol, we were situated right next to Her Majesty’s Court, so we had prime space to see and be a part of the action.

From there the rest of the weekend was a whirlwind.   Each day welcomed and escorted Her Majesty, Queen Elizabeth I (played in New York by a wonderful and beautiful woman named Lena) throughout the streets of Sterling, the village that the faire creates.   After her monumental arrival, the Trayn’d Bandes headed back to the encampment, so that our Captain and Lieutenant could prepare for their HOW NOT TO DIE SHOW. 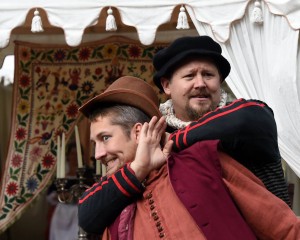 The Lt. is totally comfortable. 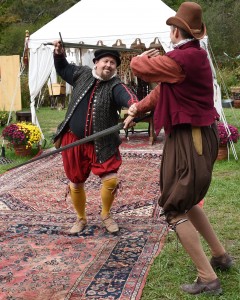 The Captain attacks. The Lieutenant defends.

Some of you have hopefully had the privilege of catching the HOW NOT TO DIE SHOW at Bristol.  If you haven’t, you are missing a real treat.   Throughout the course of the demonstration, the Captain and Lieutenant, along with one of the pikeman, show the audience the Art of Defense.  Different Western Martial Arts maneuvers and techniques that were incredibly popular during the Elizabethan time period.   More importantly, they show you how to get out of them, and HOW NOT TO DIE.

After that, we went throughout the city with Her Majesty, on a great parade, greeting all of the visitors to the shire of Sterling.   The parade then takes the gentlemen back to the encampment, where we talked with visitors and had some lunch.  Upon the Queen’s return, the Captain was presented to her, and she invited him to eat supper with her.  Some of us then went before the Queen and sang one of the songs that is very close and dear to many of us.   It was a moment that definitely created a lasting memory, to be able to share a song that we sing often at Bristol, but that is unique to only us.   Sharing that with our fellow performers in New York, and seeing the emotional impact of the song was really something.

In the afternoon on Saturday, we had a really fantastic opportunity to meet up with some of the members of the Military Guild in Sterling, The Guild Of St. Longinus – Fähnlein der Heiligen Lanze.  They portray  a group of German Landsknecht Fähnlein and its baggage train & campfollowers hailing from the city of Ulm in the Swabian region of the Holy Roman Empire, in the year 1528. They present themselves to the audience as if they are visiting the English Shire of Sterling (New York Renaissance Festival) to recruit mercenary troops.   They too have a show they present about martial arts, and I know that our guys had a really enjoyable time, not only watching them but working with them.  The ability to have vibrant and really insightful discussions about a common passion is something that many of us love, and having that same intensity from another group is incredibly rewarding.

In the afternoon on Sunday we had some time to explore, and per the usual, create some mischief.   Jeff Shoemaker, one of our members had brought out 50 feet of rope  to New York.  (How he got in on the plane, is another question).   Jeff had the idea of making a map of Sterling.   We would use the rope and then determine what the actual distance between objects was.   Now, this sounds like an incredibly educational venture.  However, we had no idea what we were doing, and we found great fun in measuring distance from patron to patron, than we did actual distance.  That said, we made sure to include where each of the pubs was located.   Regardless, we had some good laughs with it, and more importantly, we had some really entertaining interactions with the guests of the faire. 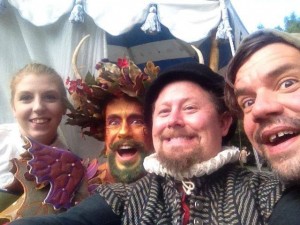 On Sunday, before we were about to leave, I had a really fantastic moment.   I watched this mother and son walk past one of the performers ( and a very dear friend of GSM, T Stacy Hicks.)   That day, he was portraying Oberon, the King of the Fairies.  I watched as he, very stoically, beautifully, and silently greet this  boy, who had to have been about ten or eleven.   The interaction lasted something of maybe five seconds, because the mother was taking the boy to get something to eat, but as they walked past me, the boy said to his mother, “Mom!  Did you see that!  That fairy said hi to me!  He looked so cool! I can’t believe I saw a real fairy”.   Even for a ten or eleven year old, a child who is going into middle school,  Stacy suspended his disbelief.

It was then that I realized how much of an impact we make on our audience.  Regardless of where you are, what state you are in, what costume, what character, we as a cast, make an impact and suspend reality.   It’s not just at Bristol, not just in New York, not just in California at our other sister faire.  It’s everywhere.  We as a cast at Bristol, create something magical, but New York does the same thing.  If they didn’t, that boy wouldn’t have believed he saw a real fairy.   It really speaks to you the power we hold as performers. 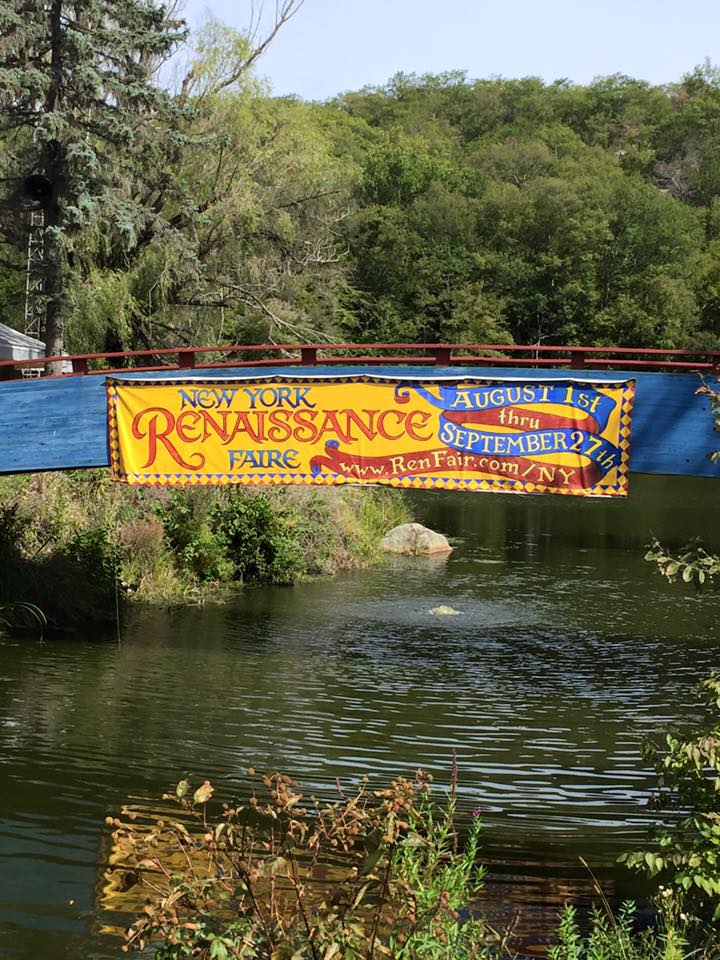 Until we meet again.

Over the course of the weekend, we were shown such immense kindness, love and hospitality, that I realized how truly fortunate I am, and the Trayn’d Bandes are, to be a part of such a community.   To be a part of community that opens it’s arms and it’s hearts to complete strangers.  Who trust us to play with their audience and make memories alongside them.   It was absolutely memorable, and I cannot wait for what new memories we will make if we return to Sterling again.