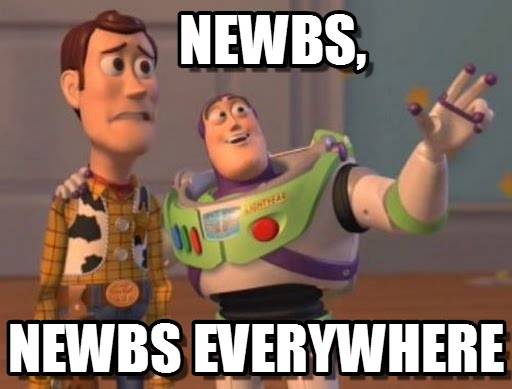 newb
A term used to describe a inexperienced person/etc.
Unlike a noob, a newb is someone who actually wants to get better.
—————–
Fo serious though.  They are everywhere.  Your favorite Trayn’d Bande just got a whole lot bigger.
That’s right folks.
WE ARE TAKING OVER BRISTOL!
You must be thinking, “Wow.  They must have a Spartan army sized muster list this year. ”  While there are physically more of us this year (We have over 10 new recruits), when I say bigger, I am referencing the sheer amount of energy and passion and drive that our newbs possess.
We had our first rehearsal for the 2015 Season of the Bristol Renaissance Faire last Sunday and I was gobsmacked by what I witnessed.   I had the privilege of meeting the majority of them at the end of March (you can read all about my excitement going into it here).  We additionally had a few workshops to get ready for the summer over the past few months, and was able to get to know some of them a bit better.   None of that prepared me for what I experienced last weekend.
Mother Nature, in her infinite desire to stick it to us when she can, brought about some rain that morning.   I would be lying if I said that it hadn’t affected my mood that morning, and I was a bit of a grump.   Walking into camp that morning, after hitting every red light, I was double grump.   I walked onto our covered deck area, and I could tell something was different.    Straight out of the gate, the new recruits were ready.  They had their rain gear on and smiles on their faces.  I could tell by the energy shooting out of their bodies that they were not going to let the weather dampen their first rehearsal.  It started to shake me out of my mindset a bit, and I could feel their excitement spreading.
We spent the first part of the morning getting to know each other; playing games and working with each other to cultivate the positive and supportive environment that we focus on in the Trayn’d Bande.   We played a game where we had to promote to the rest of the Bande who our partners were and why they were absolutely the most AMAZING PERSON EVER.   I had the privilege of partnering with two of the new girls, both of whom shared with me their passion for theater and their excitement at having recently graduated from high school.   The high school theater teacher in me, was immediately draw to their stories and the panache they both demonstrated was phenomenal.   When we all began sharing, magic happened.   Seeing each person come alive with telling everyone else how awesome their partner was, having only talked with each other for a few minutes, was fantastic.   After my fabulous partners and I shared why each other was the most AMAZING PERSON EVER, I realized that the funk I was in, was gone, and it was due in large part, to the energy that I allowed myself to experience.
That energy carried throughout the day, from our all cast meeting, to our pike training in the afternoon, to our closing meeting as a Bande that night.   The desire to do the best we can, the laughter, the hard work, the sense of community, the idea of family…all of the reasons why we do what we do was present, and it was present within our new recruits from the first moment of the day.    Having all of those feelings and experiences combine made me recognize how insanely fortunate I am to be part of the group I am.
We do the absolute best we can, we work our hardest,  we play our hardest, we trust each other, we support each and we come together to create something wonderful every single time we are together.  By coming together and making that unspoken commitment to each other, we are impacting those around us.   The new recruits and the majority of the group had no idea the impact they had on changing my mindset that day.  It makes me excited for what the future holds for our newbs, for the Trayn’d Bandes and for those that come into the encampment and the city of Bristol this summer.   Recognizing that potential is so  powerful and so awesome.
If that positive energy can have such an effect on me, I wonder what it is capable of for those who come through the gates of Bristol this summer?
– See you in the encampment –
Katie